Thanks to a special work celebration we had a free day at Knobels in Elysburg, PA. I had always heard of Knobels since it was a very doable day trip, but this was our first trip.

We had a really great time and credit to the park that it still has the old-school option of using tickets per ride, which has gotten so out of control. For $20 of tickets each, we had full day of rides.

Also, a special note for our ride was a stop at Breaker Brewing Company in Wilkes Barre. Just a little off the highway but very cool. Built into an old catholic school with really good food and beer.

There’s no doubt in my mind that my daughter’s decision to enter the filmmaking category in her school’s art festival was that last year only 1 person entered in her age group — so scoring at least a certificate was within reach.

However, the rules are very strict about parental involvement and if my kid is anything it’s that she’s afraid to break rules. So we had to draw a line regarding where I could help and where she was responsible.

I decided she could use an old MacBook (“the white one”) since it had iMovie. I had no idea how iMovie worked, but I threw together some random film clips and photos and then added some transitions. Boom! A movie.

I showed it to her, and said gave her some advice how to move around clips. She went out and shot the clips on an old Nikon point and shoot, and I uploaded them – then it was all her.

One day I heard her talking into the screen mic, and after I asked what she was doing – a voiceover. Yes, she was dubbing out some dialogue. I had no idea that was possible.

In the end she did get her award from the local and then later the regional PTA.  We then found that the local PBS station was having a Rod Serling Film Festival, as Mr. Serling is a Binghamton hometown hero, so we entered it there since it had a Twilight type of intro.

About the film — I saved this for last — I don’t claim to get it or even know if there was something to get, but when we went to the awards people we didn’t know ran up to her to tell her how much they enjoyed it, and she beamed. So that’s better than any certificate.

The view west from Sandy Pond State Park on the eastern edge of Lake Ontario, near Pulaski, NY.

A quick getaway to the Sandy Pond area near Pulaski, NY and on the eastern shore of Lake Ontario.  Oddly, back in the old Green Nova days, I drove through here on the way to Clarkson maybe 100 times. I had no idea this was here.

My brother’s family recently got a place here, and they invited us to come up for the weekend. The weather was as close to miserable as can be. The picture looks sunny, but it’s about 50 degrees with a stiff wind coming off the lake, but we had a great time anyway.

The surprise was the rough waves during the day. They were as big and strong, especially the undertow pull, that we really had to keep an eye on each other. It was odd having never experienced this is fresh water, but a great time. The downside was that the area has been suffering from flooding and beach erosion and these waves and winds only made it worse. You can see some baseball-sized rocks on the beach. By morning, these were piled high as they continued being pushed up all night.

Kresge Hall at the start of the MIT CIO Symposium.

I signed up to offer my assistance for the MIT Sloan CIO Symposium in social media, primarily in managing the Symposium’s @MITCIO  Twitter account.  In the end, I got much more than I expected, between the planning meetings with genuinely smart people and seeing how a conference of this magnitude comes together.

Another benefit was getting to work with some new content and social media tools, primarily the paid versions of Feed.ly and HootSuite (Yea! for people with budgets).

They worked well together.  HootSuite was great for planning and scheduling mass uploads so I could schedule out a week of panel members links or scheduled events, including the day of event posts as each new panel was scheduled to start.

Feed.ly’s advantages were in curating CIO-related news. Every few nights, I would go in and schedule 2-3 daily tweets around news updates, so I could keep a good balance of posts between event updates and CIO knowledge sharing.

The highlight of the day was actually seeing the #MITCIO hashtag appear in the trending column when the conference was spread across five panels after lunch.

In the end, I was able to capture of my earlier photos from day to get Lindsey Anderson, MIT Sloan CIO Symposium, Chair, as he signed off and announced the date for 2018.

This is the last image I used for the close of the MIT CIO Symposium to announce the 2018 event.

Family trip into NYC via bus this weekend to take advantage of the Broadway Week which makes available 2-for-1 tickets to some leading shows.  Back in the summer, my daughter had to pass on her summer theater club’s trip to see School of Rock, which was also the show her local kid troupe was putting on.

So I have had my eye out for when tickets would be available and was there in early December to get tickets to Waitress and School of Rock.  Ironically, I had to pass on School of Rock since we are a 2-for-1 does not apply evenly for a 3 person family and $129 to sit in the last row seemed excessive. I sent the Sunday matinee time, eating cookies and cakes in various locations.

Check this movie that I filmed following the SoR:Stage Door School of Rock. After we met in front of the theater, we wandered around the back just as the show’s star, Will Blum, had come out and started talking to finds. Next, everything happened real fast which I ironically filmed in slow motion, but the kid was ecstatic.

LGT Challenger (Binghamton, NY) – With crowds this small, it’s always interesting that they have such tight media rules.

The Levene Gouldin & Thompson Tennis Challenger is happening this week.  The tournament fits in as a minor league level event. That means that the best players may be ranked in the 100’s and many are breaking playing their first tournaments.  Their claim to fame is that an unknown Andy Murray won in 2005 before going on to win the 2012 US Open and then Wimbledon in 2013 and 2016, so you never know if you are seeing a future star.

What caught my eye was first that there were so few people on this Saturday. Granted it was not the finals and it was a miserable 85 degrees and 90+% humidity.

Next were the signs that basically cut down on all internet fun even though it certainly was needed to help stir up some publicity.  I’m sure the reason goes back to some lawyers making sure that no one tries to livecast from the US Open, but this event is a little off that track and should actually encourage this these tournaments to be experimental platforms for broadcasting (text or video) from a live event.

Saddle up to the Bar – Virgil’s BBQ to open at Tioga Downs & Casino, and I had a chance to do a pre-opening walkthru while they were training staff.

The tables are in the new Virgil’s BBQ that is scheduled to open next week at the expanding Tioga Downs & Casino complex.  The current Casino has very a sterile all-you-eat buffet style restaurant and a sports-type bar in the lobby, so this will be a major upgrade.

I was there with our local entrepreneur meet-up, so this gave us a chance to see what goes into a large-scale restaurant launch.  We also had a chance to check out the restaurant and also got a whiff of some smoked ribs.

This place has saddle bar seats and stage with bands and comedy shows already scheduled. So I don’t see any gamble in making a reservation for Virgils.  As soon as they open the book this weekend, my name is going in.

The search will take me to NYC later this week, but I have also been able to get passes to both MITCIO 2016 on May 18 at MIT and then ODSC on May 20-22 at the Seaport.

We did it!! We made it to Disney World, and it was a great all around week. We spent five very full days at WDW. We also added a trip to the Clearwater Marina so Col could see Winter and Hope in person.

As soon as Rock ‘n’ Roller Coaster Starring Aerosmith was over, I asked if I could go again. I had to. I also learned on this trip that a rollercoaster is even better than coffee for getting your day started. As for the early returns based on our talks on the plane ride home, it sounds like there will be another trip, since all the conversations started “Next time we come to Disney…”

Need more pictures?
There’s a running set of posts at our 7thtee Tumblr site.
And the growing monster set at the family gallery on Flickr.

This year my annual trophy responsibility included the President’s Cup.

Each year I seem to be that last one left holding the Dick’s Sporting Goods Open trophy. This year my game must be improving because I have my hands on The President’s Cup. Us and them — I mean the U.S. and the World Team will be playing to get their hands on this in South Korea in October, but on this day it mine.

Let’s not forget the one time I actually was able to attend a practice round at the 2005 President’s Cup which was near our then-home in Virginia. 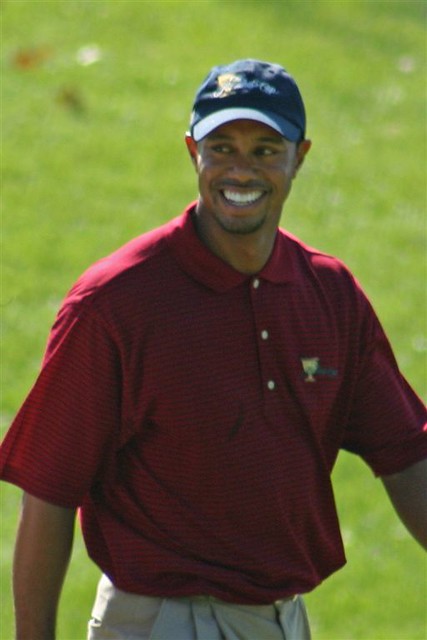